Monday, October 05, 2009 Posted by Bob at 12:45 pm
We brought the Devoto fruit out of the cold room last Monday in preparation for inoculation on 9/30. We added a small amount of tartaric acid (510g in 668kg of fruit) and water (13L) to balance it out to taste during the cold soak, though at 25 brix we’re looking at about 13.9% alcohol which is within range of where I want to be (would love to be at 13.5%). On Chris’ advice we also added a small amount (25g) of FCE enzyme during coldsoak, a pectinase that increases extraction of polyphenols (flavors, color) from the skins. 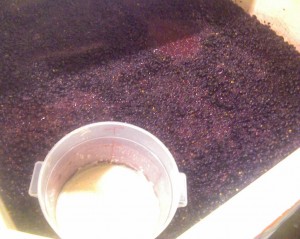 So on Wednesday 9/30 I re-hydrated 140g of RC212 (a Burgundian yeast I have a fondness for) in about 1.4L water and 180g of Goferm (yeast nutrients for rehydration). The water was initially at 40C, then we let it cool down a bit to come more in line with the wine temp (about 15C). Here I set the yeast pail into the wine to help it acclimate. A few minutes later I added some juice to the yeast pail to further introduce the two.
The Yeast Assimilable Nitrogen (YAN) in the must was measured at 201, low per Chris’ view (lots of folks like a YAN more toward 300 for a nice problem-free fermentation) — on his advice we added two courses of nutrients at 50ppm (DAP plus Superfood, which is yeast hulls and some vitamins and minerals), once Wednesday night during the “lag” beginning of the ferment, and the second at 18 brix. These guys took off over the weekend per plan (three to four punchdowns daily!), and we’re at 2 brix as of today, Monday morning. Will press tomorrow (Tuesday 10/6) at 10:30am!