Wednesday, August 14, 2013 Posted by Bob at 6:06 pm
Harvest approaches and our fruit is ahead of where it was in 2012, due to the warm dry winter and spring.  Our growers (Stan at Devoto Gardens for our Pinot Noir, and Jon at Inspiration Vineyard for our Chardonnay) scrambled to irrigate during mid July heat that reached the 90s.  But it has since cooled off and things are slowing; we’ll see what September brings! 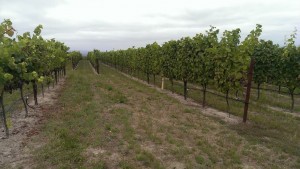 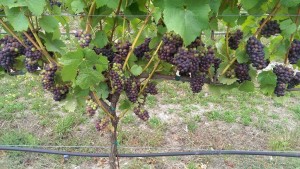 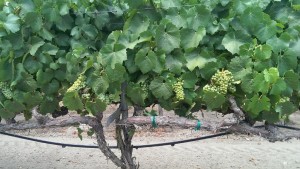 Exposed (southern) side of the Chardonnay at Inspiration, carrying more protective leaves. Quadrilateral training, harder to stay on top of what’s going on inside the canopy, but Jon has rot and mildew well in check.  Putting veraison at 70% as of two weeks back. 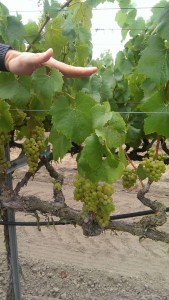 Will be asking Jon to drop fruit on these shorter shoots, which is unlikely to fully ripen.