Ripening was in full force earlier in the month when I visited several vineyards, this shot is of the 828 block at Devoto Garden. 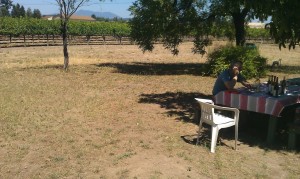 Vineyards on Olivet Lane (Russian River AVA), where I met with owner/winemaker Jon Phillips to talk Chardonnay. (The rumors are true! We are making our first Chardonnay this year, gunning for a Chablis style, un-oaked but with mouth-feel, body. Finding the right small grower is only part of the challenge…).

Here’s a shot of Jon’s 12 year old Clone 4 Chardonnay (a ubiquitous clone in Sonoma that traces its heritage (via UC Davis) to the Wente clone brought over in the early 20th century).