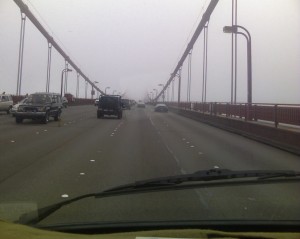 Finally posting field data for Devoto Gardens from my trip on 9/3! While San Francisco has been shrouded in fog (here’s the Golden Gate on my return trip about noon, it was even worse in the morning!), the hills of Sebastopol have been basking in beautiful 80 degree days in September. In general it had been a cold, slow-ripening summer until a heat spike (multiple mid-90’s days) in the last days of August. 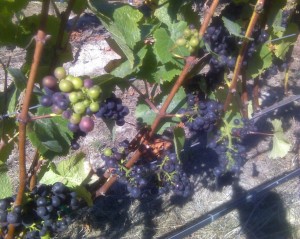 Stan has been on the ball with natural fungicides throughout the cool summer as well as more aggressive leaf pruning. He irrigated for the first time for six hours just prior to the heat spike too, managing to avoid serious sunburn/shrivel; the fruit is in much better shape than his neighbors. Brix was at 19, ripening has been a tad uneven (some hens and chicks, though not unexpected for these younger vines) though the flavors were auspicious. Here is an example of the green fruit dropped the week of 9/3.

Here’s a shot of the netti 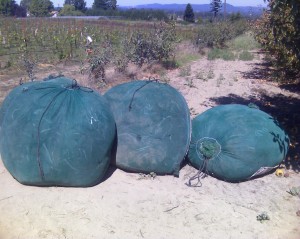 ng Stan bought, which went up last week to keep the birds at bay this year!

Am currently putting my pick date on October 6, a few weeks later than last year. The yields look to be about the same as last year. The 2009 fruit, which is still in barrel, is really shaping up to be something special, and this year is already showing more maturity with some focus that I didn’t see until later last year. 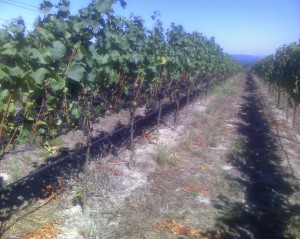 This shot here of a row in the 828 block highlights something I appreciate about this vineyard: the natural, somewhat unkempt row cover. This is a farmer’s vineyard: no sterile, showcase, heavy-chemical or machined landscaping for visual purposes, nothing over-disc’d (Stan discs every other year) possibly creating a hard-pan distressing to young roots — just a rich, live vineyard you can almost taste! 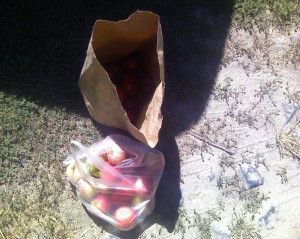 Oh, and did I mention the organic apples and tomatoes Stan also grows, a bag of which I am always happy to take!