Monday, August 27, 2012 Posted by Bob at 3:39 pm
Have been remiss in not posting more updates on the vineyards this summer — by most metrics and accounts everything looks very very good.  May-June were relatively mild, and the fruit set we got is the best I’ve seen.  Unlike others in the RRV, Devoto Gardens was not hit with a high amount of shatter due to spring rain in 2011, and this year looks even better: nice vertical growth (well trained by Stan; also a characteristic of the 828 clone), maybe 7-8lbs per vine with maybe 10% due to be dropped as veraison finishes up. 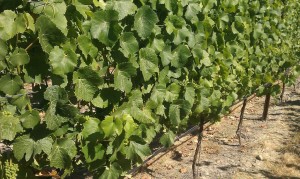 Here’s the exposed side of the 828 block.  Stan has been less aggressive with leaf pulling at Devoto Garden this year, which I like.  Mildew pressure hasn’t been crazy (Stan has been on an 18-21 day spray regimen) and I live in fear of the dehydrating 100 degree heat we got in September 2010.  So far the fruit seems to be on a beautiful slow ripening trajectory. 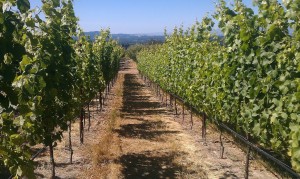 Note exposed vs unexposed sides; and the limited hedging, a nice sign of naturally controlled vigor.

This year I’ll be sourcing an additional ton from Devoto’s block of Dijon 667, planted in 2008 and first harvested last year.  I have also found some very interesting Chardonnay down the road from Inspiration Vineyards, the so-called Jack Pierce block farmed by Harvest Moon, and I’ll be sourcing that for my Chardonnay in 2012 in lieu of Inspiration.

The Pommard clone I sourced last year at Flanagan Vineyard won’t be available this year (Kosta Browne beat me to it), but I’ve decided to retire the Russian River blend I’ve traditionally made from fruit near Windsor, like Flanagan, anyway.  (The 2011 will be the last vintage of that profile — rich, opulent, thoroughly Russian River Pinot Noir to enjoy while it lasts!)  I have been moving stylistically toward leaner, cooler climate Pinot, away from the RR valley floor, south and west toward the Sonoma Coast and the Petaluma Gap….stay tuned!