2014 was perhaps our most ambitious harvest yet — when all is done we’ll have picked over 9 tons and will be on track to produce about 500 cases of wine. 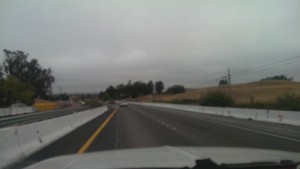 While it was generally a warm, dry growing year in the north coast, and quality looks good, I’ll remember 2014 for the ever-present fog and moisture that seemed to hang over western Sonoma every day until noon, from mid August through September. 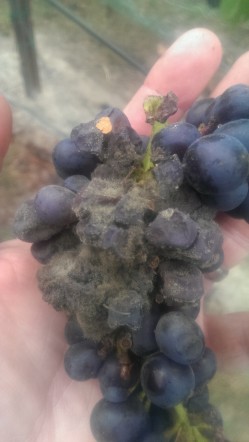 Managing rot was the order of the day, and in some cases was a trumping factor in choosing a pick date.

Here’s some rot in a Pinot Noir Dijon 115 cluster. 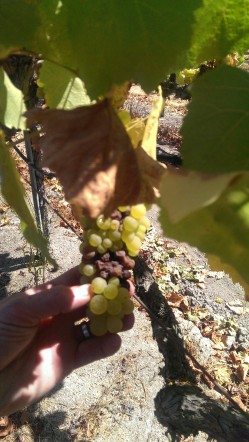 Some rot in a Chardonnay Clone 17 cluster.  (Much easier to spot in Chardonnay!) 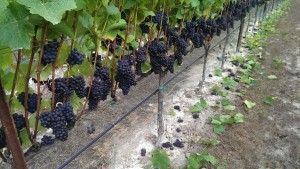 One weapon in the mildew wars is to pull leaves, increasing air flow in the canopy.  The risk is exposure to sudden heat spells (as in 2010), which thankfully did not materialize this year.

Other tools are sprays (organic and non) and walking vinerows often, cutting out rot by hand, which I did a fair amount of this year. 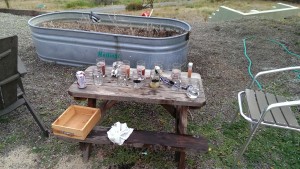 My outdoor sampling lab.  Another casualty of the wetness in some vineyards was my sampling accuracy, adding to the challenge of judging ripeness in certain blocks. 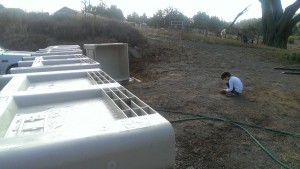 A hallmark of any harvest is just lugging things around.  This year, however, everything seemed to ripen at the same time, making the lugging a little more hectic.  Unless you’re 7, in which case there’s time to examine rocks.  Note also frog on near bin, disturbed by all the activity. 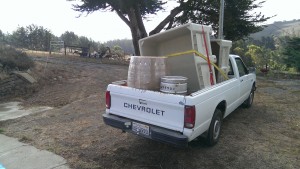 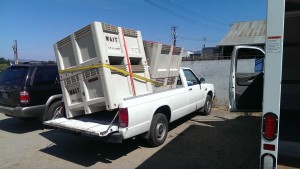 Of course this is legal. 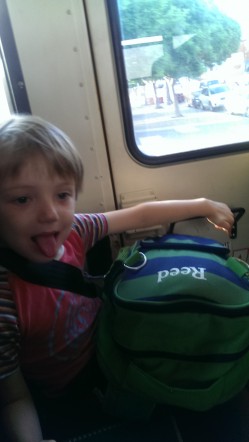 Though harvest does take it’s toll on winemaking families, one cannot forget the first week of school! 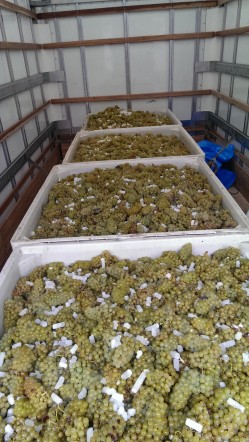 The Chardonnay I picked just after Labor Day a hair over 22 brix (those are dry ice pellets in the bins, to keep oxygen off on their ride to SF, where they were cooled 24 hours before we pressed whole cluster the next day).  Rot notwithstanding the acids, flavors and aromas look great so far: as of October 1st we are almost dry on a long, slow cool native ferment in neutral oak. 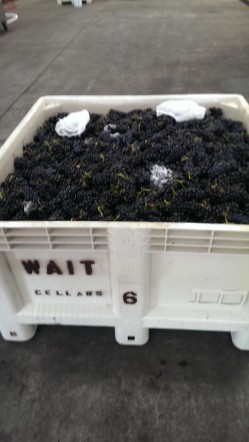 Pinot Noir 115 from 11 year old vines in the Petaluma Gap (Screeching Owl Vineyard, meticulously farmed by Deb Mayo — more on that vineyard in a coming post) which got ripe fast, we picked the day after the Chardonnay and it soaked up to 23.5 brix. 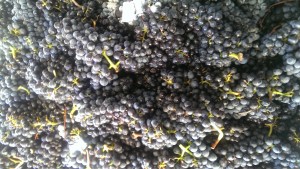 Devoto Garden 115, picked with sugars just over 23 and fantastic acids. 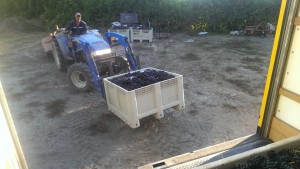 Hector at Devoto loading fruit from the Dijon 828 block a week or so after I picked 115. 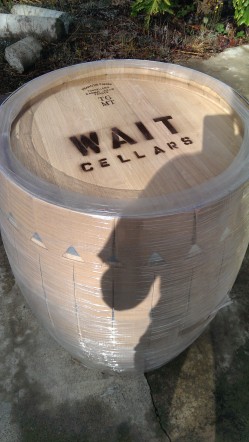 Snazzy new stencil kit to identify my pricey new French barrels.  I bought three new barrels this year for Pinot, out of a total of 17-18 some barrels of Pinot overall, so new oak will again be modest.  Still TBD as to the break down between our Devoto Garden Pinot, which I think can take on more oak as the blocks mature, and the still-to-be-announced Sonoma Coast Pinot with the Petaluma Gap fruit at its heart