Beautiful day in the vineyard! 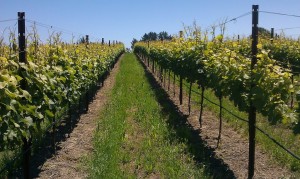 With the crazy wet spring (including hail a few weeks back!), fungal pressure is very high. Stan, like most conscientious growers, is maintaining a focused spray regimen (mostly sulfur, with smaller amounts of zinc, boron, copper, and some Pristine). 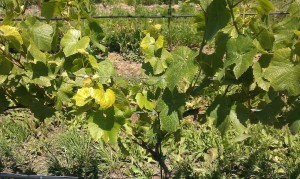 Organic compounds are best used proactively, before mildew sets in. Some are ideally used before rains (which propagate spores), some after to avoid being washed away. One really has to be paying attention to the vineyard, and the weather, right now.

Not only was mildew in check, I saw nice even growth, dry 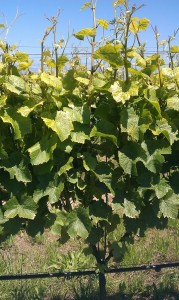 speckled canopies — and bloom, fortunately not early, just around the corner.

Some growers with early-ripening varieties had their blooms hammered by rains a week or so back, leading to spotty pollination and lowered yields.

This year we’re leaving more canopy lower. Last year was instructive: We were aggressive with shoot thinning last year (also a wet cool spring, though not like this year), exposing the fruit to air and sun. Which was great until the heat waves in late August and September, where the fruit got a bit dehydrated. This year he’s leaving more leaves, and compensating by spraying more often — but with more dilution, such that the overall amount of sulfur and copper remains the same.

These vines have weathered the wet spring beautifully. Here is to warm days and cool nights through bloom and on to veraison!